I simulated an IEC NEMA phantom on a PET using GATE and reconstructed it using CASTOR without any correction (random, scatter, attenuation and normalization). The reconstructed image was undesirable. I found that for random and scatter correction I can write “-t” on the castor-GATERootToCastor to convert only trues (is it right?). But, how can I perform the attenuation correction (and also normalization)?
I used bellow commands for convert to CASTOR and reconstructed it.
./castor-GATERootToCastor -i output.root -m mymacfile.mac -o IEC -s IEC -geo -k
./castor-recon -df IEC_df.Cdh -dout IEC -opti MLEM -it 10:20 -th 40 -dim 512,512,1655 -fov 600,600,1940
I attached the reconstructed image here. I would therefore appreciate it if anyone could help me to apply any correction on it.
Best regards
Hadi 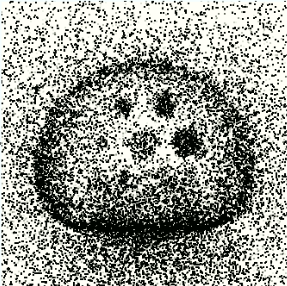 You can provide an attenuation map to castor-recon if you use list-mode format with the -atn option (or directly to castor-GATERootToCastor if you want to get an histogram) .

Looking at your image, it is not easy to know what is wrong without details about the simulation and the image values, but it seems it was reconstructed from a simulation with very low statistics.

Hi Tmerlin
Thank you for your answer.
I provided an attenuation map using mu map actor in GATE using the following commands:

Could you share the header of your mumap (myMapFileName-MuMap.hdr) ? It looks like the problem comes from some interfile keys.

Hi Thibaut
Thank you for your answer.

I shared it. I got it from GATE directly.

Could you check if there is an issue with the file ? I couldn’t open it using regular text editors.

Hi Thibaut
I am sorry for the delay.

Could you share a sample of the header (.hdr) file ??
Thank you so much.

Here is a umap example.

Thank you very much.