I have one dataset (PET list mode) of a Nema phantom that ‘moves’ in the x-y direction. The phantom is always in one position for 300s and then it moves in one moment to another position where it is 300s. This in total for three positions. (The translation of the phantom is 2 cm in x- and y-direction).

I reconstructed this dataset in two ways:

I can imagine this is quite an extensive story, but I wanted to explain it well. Hopefully this makes it a little bit more clear. 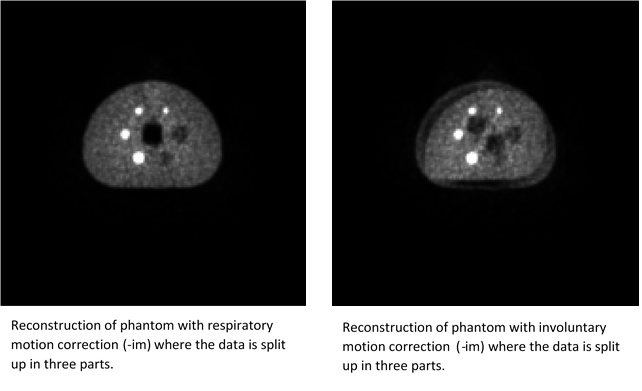 Thank you for detailing the issue. The difference should come from the sensitivity image weighing, as for -im case the weighing depends (among other things) on the duration between two motion triggers. Using -rm, the sensitivity images for each gate are simply averaged so it would work only if the motion triggers are evenly spaced during the acquisition, which is actually the case with your setup. What I don’t understand is why do you get these artifacts using -im, which should be the proper way to go… Did you get this problem with the v3.0 version as well ? Or is it just with the v3.1 version ? If you could upload the data somewhere, I will have a look.