I try to reconstruct the TOF image by converting the root result obtained by the GATE simulation into a castor file.
I have added the TOF_reso command and converted the data. Do I need any other commands besides this command?

The commands used to create the two images are shown below. 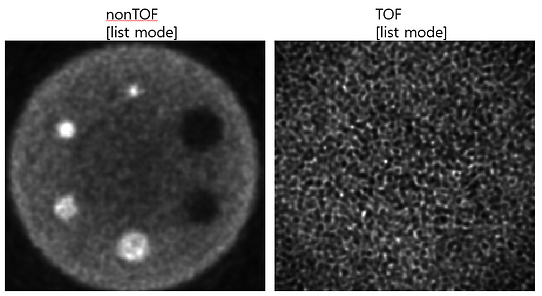 How can we solve it?

Any help I would really appreciate it.

There is no additional commands to use besides -TOF_reso, which will provide the assumed time resolution of the system. The TOF measurements dt for each event is computed from the time1 and time2 ROOT variables, and the time measurement range (written in the datafile header) is recovered during the conversion process. You could check if the dt measurements in your datafile seems consistent using the castor-datafileExplorer executable with the following options to explore the datafile event by event : -df /path/to/datafile/header -i -e
Depending on the ToF resolution, the convergence with ToF correction could be much faster than with non ToF. At some point, increasing the number of iterations would just increase the noise level, so it could be worth to check the image you get just after a few iterations (e.g 3, 4 iterations, without subsets). 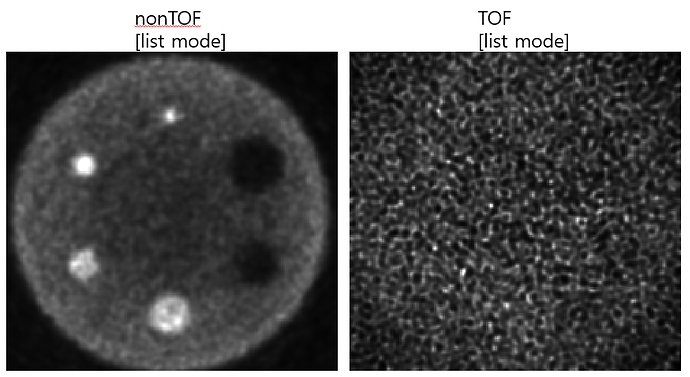 First, thank you for your reply. Merlin

I reconstructed the TOF image using the benchmark example. There were two example files.
One is list-mode data, and the other is histogram-mode data.
However, when I looked at the header file of both data, they were both TOF data.
The differences found in the two header files were the number of events different. The number of counts of list-mode data was about 1.5 times larger.
Why does this make a difference?

I compared non-TOF data obtained by Gate simulation and converted images into list-mode and histogram-mode, respectively. In conclusion, images using histogram-mode data were better.
Could you explain the exact reason?

Any help I would really appreciate it.

Could you indicate what is different between the images reconstructed from the histogram and list-mode datafiles generated from your GATE simulation data ? The resulting images should be identical, but there could be some small differences due to the way the sensitivity image is computed in both case.